Loyal followers of HBO’s hit series Game of Thrones will be familiar with Valyrian steel – an ancient material used for forging swords so exclusive and so powerful that they are almost unbeatable. For those familiar with Viking lore, the notion of a superstrong sword may not seem at all far-fetched. In fact, the Vikings had something quite similar – and it carried the name “Ulfberht”.

Researchers have uncovered approximately 170 of these Viking superswords. They date from 800 to 1,000 A.D. and are all inscribed with a single word – “Ulfberht”, which some believe is linked to the identity of their maker – and two crosses.

One of the most perplexing things about the Ulfberhts is the strength of the metal from which they were made. The material, known as “crucible steel”, is so strong and pure that it seems inconceivable that any blacksmith of that time could have handled it. In fact, since the age of the Ulfberht, this quality of steel was not seen again in Europe for over a thousand years. However, at the time the Ulfberht swords were being forged, similar weapons were also being produced in the Middle East. The latter were made of so-called “Damascus steel”, which comes from a raw material known as Wootz steel, and originates in Asia. Both Damascus steel and crucible steel have been found to contain unusually high amounts of carbon. 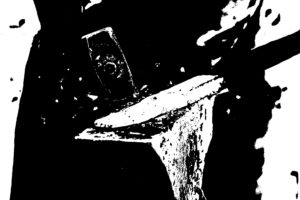 Recreating Ulberht
In order to establish whether it would in fact have been possible to manufacture an Ulfberht sword, using only the metalworking knowledge that would have been available to sword makers of that time, a modern-day blacksmith, Richard Furrer, from Door County Forgeworks decided to try to recreate the Ulfberht in his forge in Northern Wisconsin, USA. The experiment was carried out as part of a Nova National Geographic special about the Ulfberht. Using an ancient Middle Eastern furnace made of clay and brick – a so-called crucible – Furrer started by melting iron with carbon to create steel. A basic pre-requsiste for producing pure, high-quality steel is heat. In order to get the steel to separate from the impurities, known as “slag”, the furnace has to reach a temperature of up to 3,000 degrees. Crucible steel is difficult to work. It took 11 full hours of pounding for Furrer to transform the crucible steel ingot he created in his furnace into a blade. After that, the sword had to be branded with the word Ulfberht and two crosses, and then heat-treated to weld the symbols into place. After it cooled, it took several days to polish it up and give it the exclusive lustre of a real Ulfberht.

Where did steel come from?
The experiment was a success. However, although Furrer was satisfied that it would have been possible to build a sword of this quality in the Viking age, he remained puzzled as to how the Vikings got hold of the steel. “The biggest mystery is where did they get this raw material,” Furrer told Nova. “We have no evidence of crucible steel production in Europe until 800 years later.” According to Fredrik Charpentier Ljungqvist, a researcher at Stockholm University, the answer may be quite simple. The existence of the Damascus swords prove that, while the expertise to create crucible steel did not yet exist in Europe, it was present in the Middle East. Meanwhile, artifacts found at archeological sites from the Viking era prove that the Medieval Norsemen traded with the East. We also know that they could travel by water – on rivers and lakes – all the way from Lake Mälaren outside modern-day Stockholm to northern Iran. The route was known as the Volga trade route.

“Most Ulfberht swords are dated from the exact same time that the Volga trade route was open,” Charpentier Ljungqvist told Nova. “I think it’s very likely that the steel found in Ulfberht swords originated in Iran. I would guess that you bought it from friendly trading connections in Iran, paid with furs or other Nordic commodities, and took it back on your small ships that you used on rivers.” Dr. Alan Williams of the Wallace Collection in London is one of the world’s leading experts on historic steel weaponry. Williams agrees with Charpentier Ljungqvist: “After the 11th century, the Volga trade route is closed and the manufacture of these Ulfberht swords stops, which to me is strong evidence that they were made out of an imported raw material,” he explained.

To own an Ulfberht sword was not only prestigious, a good quality sword increased the changes to survive a battle.

Who or what was Ulfberht?
Having solved the mystery of the material, a key question remains: who – or what – is Ulfberht? Branding a sword is risky business. The cuts could damage the blade and only an expert craftsman would have had the skills required to brand the Ulfberht swords. The name and the two crosses must have held considerable value, as branding the swords also involved a great deal of extra effort. At first, it was thought that Ulfberht was the name of their maker but, as the swords were produced over a period of about 200 years, they could not possibly have been the work of one single person.

Symbolic or magic
While Ulfberht is a Frankish name, the cross was a symbol typically only used by high-ranking members of the Roman Catholic Church, such as bishops or abbots. Although the Catholic Church was an enemy of the pagan Vikings, it was a major producer and dealer of arms. But if the swords were made by Catholics and smuggled North to their sworn enemies, how did the church get the steel? The theory that the Vikings brought it from the Middle East would appear to make more sense. Dr. Williams believes there are many reasons why a Scandinavian might have used a foreign word and the cross. “It might have been magic, it might have been copying symbols from the disappeared Roman Empire, it might have been simply because someone thought they liked the name, like putting the name Apple on a computer,” he admitted to Nova.

Pirate copies
Of the 44 Ulfberhts Williams has examined, 33 are engraved with “Cross – U L F B E R H T – Cross”, while 11 are branded “Cross – U L F B E R H – Cross – T”. According to Williams, only the latter 11 are made of high-carbon crucible steel. The remaining 33 are made of inferior steel, suggesting that they are probably copies. “They’re contemporary fakes, of course. They were made at the same time; by people trying to cash in on the reputation of Ulfberht. They were probably made by illiterate craftsmen, for illiterate customers. To the unsuspecting buyer, it appears to be a genuine Ulfberht but there is a much greater chance of it snapping, which is of course extremely embarrassing in battle,” concluded Williams.

While the identity of Ulfberht is likely to remain a mystery, there is no doubt that the name carried a similar cachet to that of a modern-day accessory made by Gucci or Prada. Or, in the words of Fredrik Charpentier Ljungqvist, “It was the Rolls Royce of swords”.