The walls thunder and the steel is screeching. Ponytails swirl around in the air. The Women’s Smithy (Kvindesmedien) at Christiania may seem like something out of a naughty fantasy, but in the workshop where the women work, the air is thick with business know-how and an order list so long that any sleazy thoughts soon disappear. Meet the female blacksmiths from Christiania. 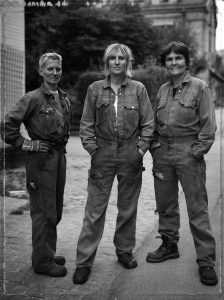 The three founders of the Women’s Smithy when it started. Fl. Dorte Eilenberger, Charlotte Steen and Gitte Christensen.

A new town to be built

The Women’s Smithy is located at Freetown Christiania in Copenhagen. The town has been built by its residents since it was first occupied in 1971, and on a quiet day, the hammering, crackling and deep concentration can be heard between the liberal-mindedness and singing of birds there. The three women, Charlotte Steen, Gitte Christensen and Dorte Eilenberger are the three founders of the Women’s Smithy, and they have hammered a lot of iron to get where they are today. Charlotte and Gitte tell the story here.

From green grass to black iron 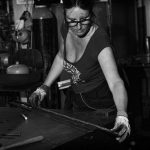 Charlotte Steen has developed the business model for the Women’s Smithy from performing all sorts of specialised tasks to primarily focus on kitchens, church art and New York Walls.

“Christiania arose because we wanted to build a town and a town has need for all kinds of crafts. Therefore, the women naturally got into the field of crafts,” says Charlotte, who has lived at Christiania with her two children since 1986 in a self-built house. She worked as a gardener for many years but an encounter with a female smith aroused her interest in steel, form and design. She took the smith techniques that she learnt on the Danish island of Bornholm home with her and the Women’s Smithy now produces specialised products such as New York Walls, kitchens and church art to order. 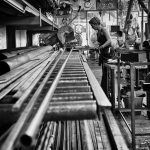 Dorte Eilenberger is one of the three founders of the Women’s Smithy. She currently works mostly on the bookkeeping.

The angles are the most difficult

Gitte Christensen became a smith from one day to the other. “I was asked and I thought that it sounded funny.” She looks at Charlotte and the glance takes them back to 1987 when it all began: “My friend travelled to India and needed a substitute, so otherwise it was a case of learning by doing,” she says. Gitte found her call with her first welding and explains that it’s a bit like sewing. “You need to possess the same kind of calmness,” she says. Charlotte continues: “What’s difficult is the actual craft. There are many smiths with all kinds of specialities. We are blacksmiths and specialise in aesthetic solutions. Otherwise it’s just a case of getting on with it. Bang. All the refined things are in the detail, and that’s what makes it interesting,” she says. Gitte nods in agreement. “It’s not the welding that is difficult. It’s the angles that are the most difficult to get right.”

The first blob of welding holds everything together

It is clear that an idealistic, strong-willed and well-oiled motor drives the workshop’s success. A girl with her hair dyed purple at the ends comes over and shows a production. The women nod. There are currently 13 women associated with the workshop. Among these are several workplace learners. “This is the only smithy in Denmark where work such as ours is carried out with specialised production,” says Charlotte.

Charlotte talks about the passion that drives it all: “Wood doesn’t say much to me. The first time I applied a blob of welding I felt as follows: This fits perfectly with my temperament. It goes really fast. When you put two pieces together, they stay together. Working with wood involves so many processes before you achieve a result.” 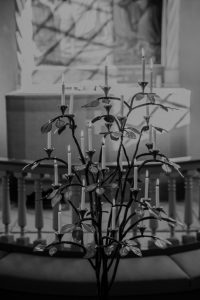 More than 50 churches in Denmark currently contain Gitte Christensen’s light trees that are made to order.

We are not special because we are women

The Women’s Smithy forged ahead in the 90s, when many others had to close their doors. Charlotte says: “The fact that we are both a village smithy and produce our own designs means that we develop our products at a frenzied rate and without realising, set out on an entrepreneurial adventure we had not counted on. We worked 50-60 hours a week,” she says.

It’s not every day you find a smithy consisting only of women, but they themselves don’t consider this to be anything special. “We didn’t think we were anything special because we were women and smiths. It’s everyone else who thinks that this is special,” she says. 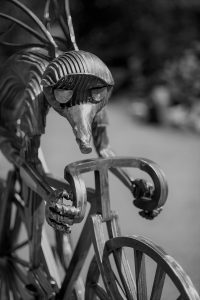 Charlotte Steen has made a sculpture of Egon the Cycling Mosquito, which is located in Rudersdal Municipality. Her dream is to make several more ornamentations of, i.e. parks.

Cykelmyggen Egon (Egon the Cycling Mosquito) and the Zulu Awards

Charlotte thrives in the major projects and has, amongst other things, made a large model of Egon the Cycling Mosquito in collaboration with the Danish illustrator and novelist Flemming Quist Møller. “A friend helped me to illustrate it in 3D, which enabled me to weld it in layers of sheets. It was wildly exciting.” The sculpture stands as an entrance figure for a playground in Trørød, north of Copenhagen. Dorthe keeps the books and specialises in smaller sculptures. She has, i.e. made the statuette for the Danish award ceremony known as the Zulu Awards. Gitte specialises in church art, and buyers currently include more than 50 churches in Denmark, such as the Church of Our Saviour in Copenhagen.

Charlotte has clear visions for the future: “I would like to refine things more and work in a more targeted way on kitchens and New York Walls. We need more regular products, which are priced in advance, and this concept is more or less ready now. The product will be super cool. I also believe that we will find a new and exciting collaborator.”

At the Women’s Smithy, you will find real ladies who are not afraid of noise, dirt and hard work. Follow them on Instagram and drop by the workshop when you visit Christiania.

The custom-made kitchens ooze of aesthetic and accomplished craftsmanship. The concept has been developed by the Women’s Smithy over a number of years.