Successful tests by steelmaker Ovako together with Linde show that hydrogen fuel can help steel industry reduce emissions by using hydrogen instead of fossil fuel to heat steel.

Hofors, a small town 2.5 hours north of Stockholm, has been a focal point of the Swedish steel industry for centuries. The town’s mill, owned and operated by steelmaker Ovako, has been in operation since 1604.

And earlier this year, Hofors was the scene of yet another important step in the steel industry: the first-ever full-scale test of heating steel using hydrogen as a fuel and oxygen as an oxidant before rolling. Carried out as part of a cooperation between Ovako and Linde, the test took place in one of Ovako’s pit furnaces at the Hofors rolling mill and had important implications for the future of the steel industry.

“It was really a historic moment for Linde and for the steel industry,” he recalls.

Present for the test was Ola Ritzén, Product Manager Metallurgy at Linde. And as he watched the glowing steel pass through the rollers, he knew he was witnessing a significant achievement.

“It was really a historic moment for Linde and for the steel industry,” he recalls.

Hydrogen instead of propane

In front of Ritzén and other colleagues from Linde and Ovako was the first fossil fuel-free heated ingot to go through a full-scale production hot steel rolling process. Traditionally, propane is used to heat the pit-furnaces where steel ingots are heated to temperatures above 1200 oC before they are rolled into different shapes for further processing.

But during this test, the Ovako furnace was heated using hydrogen. Rather than coming from oil, hydrogen fuel is created through electrolysis – the process of splitting water into hydrogen and oxygen using electricity.

Comprehensive analysis of the steel following the test revealed that heating with hydrogen did not adversely affect the steel’s quality.

This positive outcome lays the groundwork for introducing hydrogen as fuel for heating in full-scale rolling mill furnaces, which has the potential to drastically reduce the steel industry’s environmental impact.

“We now know it’s possible to use hydrogen without affecting the quality of the steel, which translates into a huge potential to drastically reduce our already world-leading low carbon footprint from cradle to gate,” adds Ovako’s Anders Lugnet.

Using hydrogen as a combustion fuel has become an increasingly interesting area of research as Ovako and other steelmakers look to lower their reliance on fossil fuels and lower emissions.

When hydrogen fuel burns, it reacts with the oxygen and is converted back into water. As steam is the only by-product of hydrogen combustion, steel that is hot rolled using hydrogen fuel is free from emissions such as CO2 and SOx.

And in Sweden, electricity is generated primarily by non-fossil-based processes such as hydro-, wind- and nuclear power, resulting in hydrogen fuel that is more or less CO2 free.

“This means that greenhouse gas emissions from the hot rolling of steel are practically eliminated,” Ritzén explains.

The full-scale hydrogen combustion test at Hofors is just the latest example of a long history of cooperation between Linde and Ovako to find ways to reduce energy use and emissions from steelmaking.

Currently, the steel industry is responsible for seven percent of global CO2 emissions, and finding ways to reduce emissions is high on steelmakers’ agenda.

Ovako has already converted 57 furnaces to oxy-fuel combustion, resulting in world-leading reductions in energy and CO2 emissions as well as increased capacity and quality.

And shifting from fossil fuel to green hydrogen with the help of Linde would help Ovako further bolster its reputation as a steel industry sustainability leader.

“We’ve worked closely with Linde for many years and were proud to be able to do this together with them,” says Lugnet.

One of the most important steps in Linde’s hydrogen cooperation with Ovako took place months earlier at Linde’s Combustion Technology Center in Älvsjö, just south of Stockholm, where the initial hydrogen fuel tests were carried out in Linde’s state-of-the-art combustion lab.

The success of those tests, which were carried out in a controlled, demonstration environment, gave Lugnet and his colleagues at Ovako the confidence to move forward with full-scale testing at the company’s production site in Hofors.

“It’s very exciting that we now have proof that it’s possible to use hydrogen in heating without affecting the quality of the steel,” concludes Anders Lugnet, Ovako.

Ovako is now considering rolling out the solution to the rest of the Hofors facility, and possibly expanding it to other production sites as well, in its continued efforts to improve sustainability. The company already has an 80 percent lower carbon footprint compared to the global industry average, and thanks to the fruits of its ongoing partnership with Linde, the Swedish steel maker believes it can do even better.

“It’s very exciting that we now have proof that it’s possible to use hydrogen in heating without affecting the quality of the steel,” concludes Anders Lugnet.

“If we can make this investment and expand the process further, it could reduce carbon dioxide emissions by 20,000 tonnes per year. And that’s just the beginning.”

Read the article in Gasworld 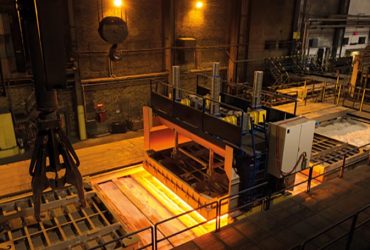 Drawing on more than a century of innovation in the Nordic region, …
Mixed/other